3. Americans who have a closer relationship with their news sources are more supportive of the news media overall

Americans’ relationships with their news sources are strongly linked to their views of the news media more generally. For example, those who feel connected with their news sources are much more positive toward the news media in general – though most say they don’t feel this type of connection. Likewise, those who think something close to them personally was covered well also tend to have more positive views toward the media overall.

When deciding how to choose their news sources, Americans have a range of priorities, with journalists’ demeanor, perspectives and willingness to cover people like them rising to the top.

Just over half of U.S. adults (55%) say it is at least “somewhat important” to be connected to the outlets they get their news from, including 17% who say it is “very important.” But most Americans do not feel this personal connection. More than half (57%) say their news outlets do not particularly value them, while 39% do feel valued. And as reported earlier in this yearlong study, most (59%) say news organizations do not understand people like them, on par with the last time the question was asked in 2018.

This builds on previous Pew Research Center findings that many Americans do not feel that local journalists are connected to their communities. 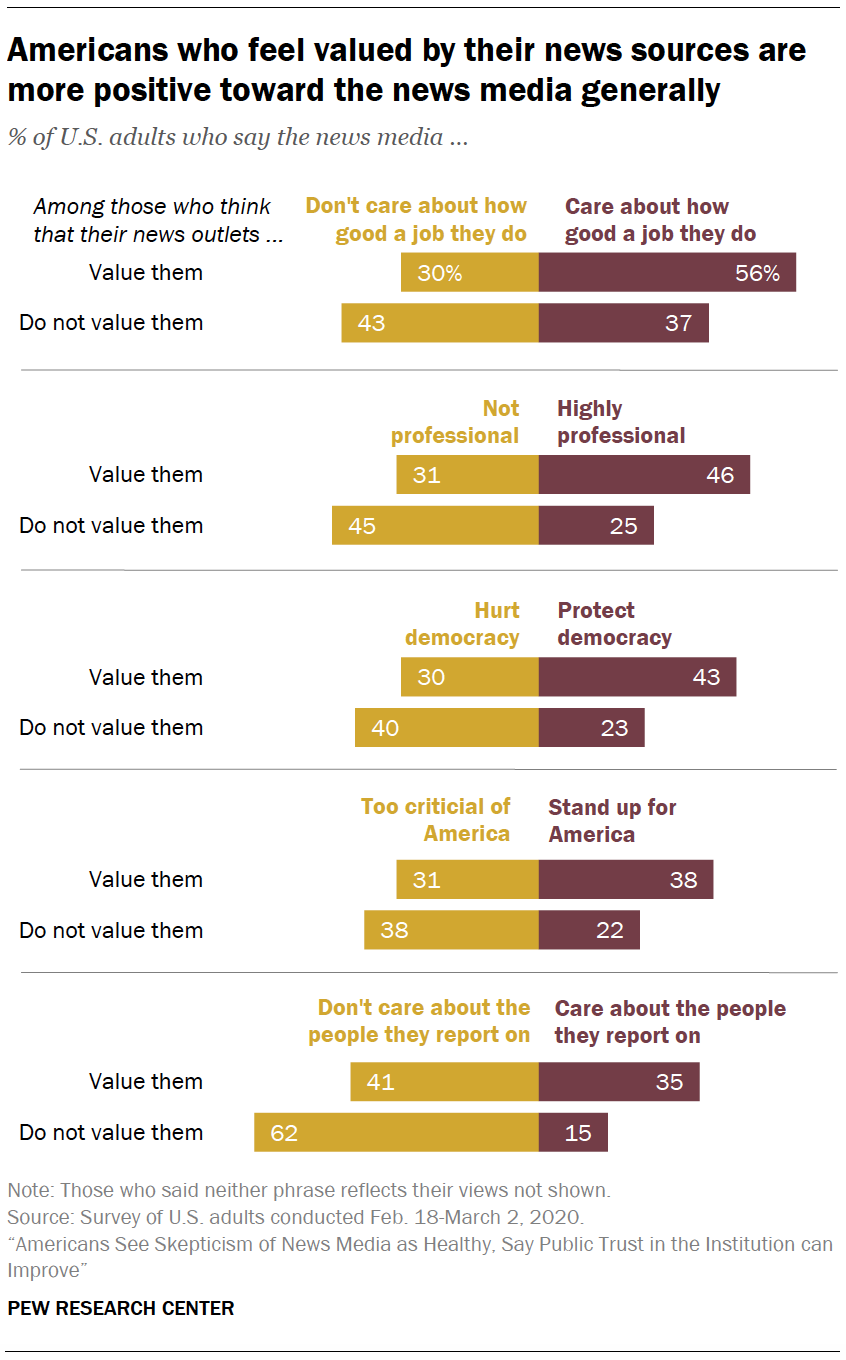 Those who do feel a personal connection with news organizations often are more supportive of the news media overall, a pattern that persists even when accounting for party identification and age.

This relationship clearly stands out in perceptions of the news media’s place in society and their standards. When asked to evaluate the news media across five dimensions, those who feel valued by, understood by and loyal to news organizations often view the news media more positively than those who don’t feel these things.

Similar divides emerge across a range of attitudes, including perceptions of how much confidence the public has in the news media, expectations about the accuracy of news and views of whether news outlets are transparent.

“You just tend to trust them more because you know them.” – Woman, 46

“If you are personally connected to that person, that could dictate bias.” – Man, 37

Americans’ connections with specific news stories also strongly tie to their views of the news media. Those who think that something personally close to them was covered poorly are far more negative toward the news media in many ways, a relationship that persists even when accounting for partisan differences.

Nearly six-in-ten U.S. adults (59%) say they have been personally connected to a story, either because it covered an issue they believe they are an expert on or because it was about a significant event that they experienced or witnessed. Most of those who have had this personal connection to a story think that the issue or event they were close to was covered at least “somewhat” well (65%), though few – 12% – say it was covered “very” well. The remaining 34% say the news story covered the issue or event “not too” or “not at all” well. 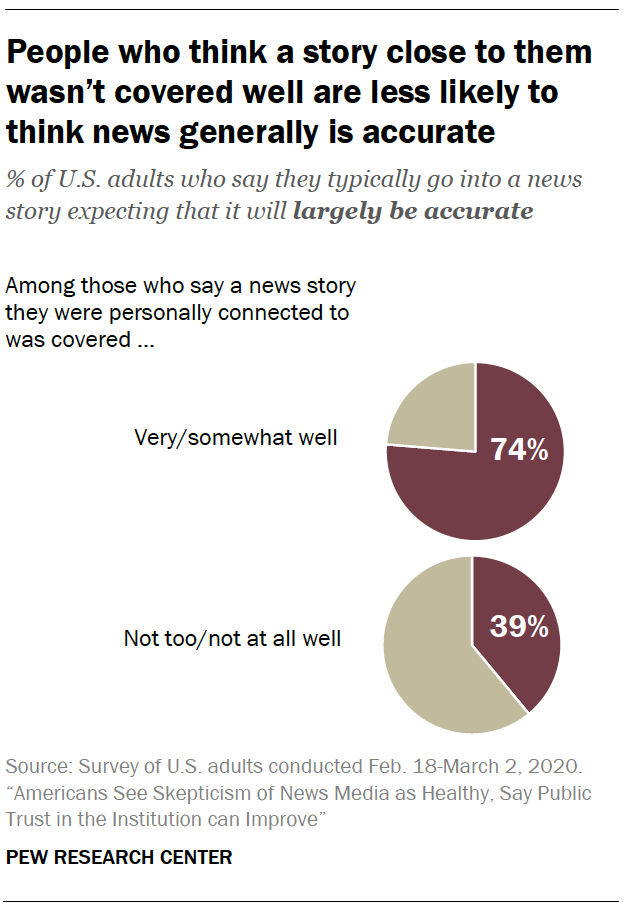 Where Americans come down on this question appears to go hand in hand with their broader evaluations of the news media, including their perceptions about the accuracy of news overall. Nearly three-quarters of those who think favorably of the news story they were close to (74%) expect the news they get to be largely accurate. This falls dramatically to 39% among those who say the story close to them was not covered well.

There is a similar divide on the question about whether news organizations admit to their mistakes. Just 14% of those who think news that was personal to them was not covered well say journalists own up to their errors, compared with 41% among those who think the story they were close to was covered at least somewhat well.

This pattern persists across many other opinions people have about the news media. For example, those who say that something personal to them was covered poorly are much less likely to say news organizations are transparent with their audiences in a variety of ways, and they also are less likely to think that the public has confidence in the news media.

“I think that I have to check everything they’re saying against another source. I try not to form an opinion until I’m able to vet it. You see something and if it’s in your wheelhouse, you altogether know that they’ve gone and lied. It makes you defensive. Now you know you can’t trust them, or you can only put so much trust in them.”– Man, 70

“I remember watching this one interview … and I happened to see the report. I’m watching the interview, and it’s totally different than, I mean, I was like 5 feet away from this man. So I’m literally hearing and watching it. It was just skewed.” – Woman, 21 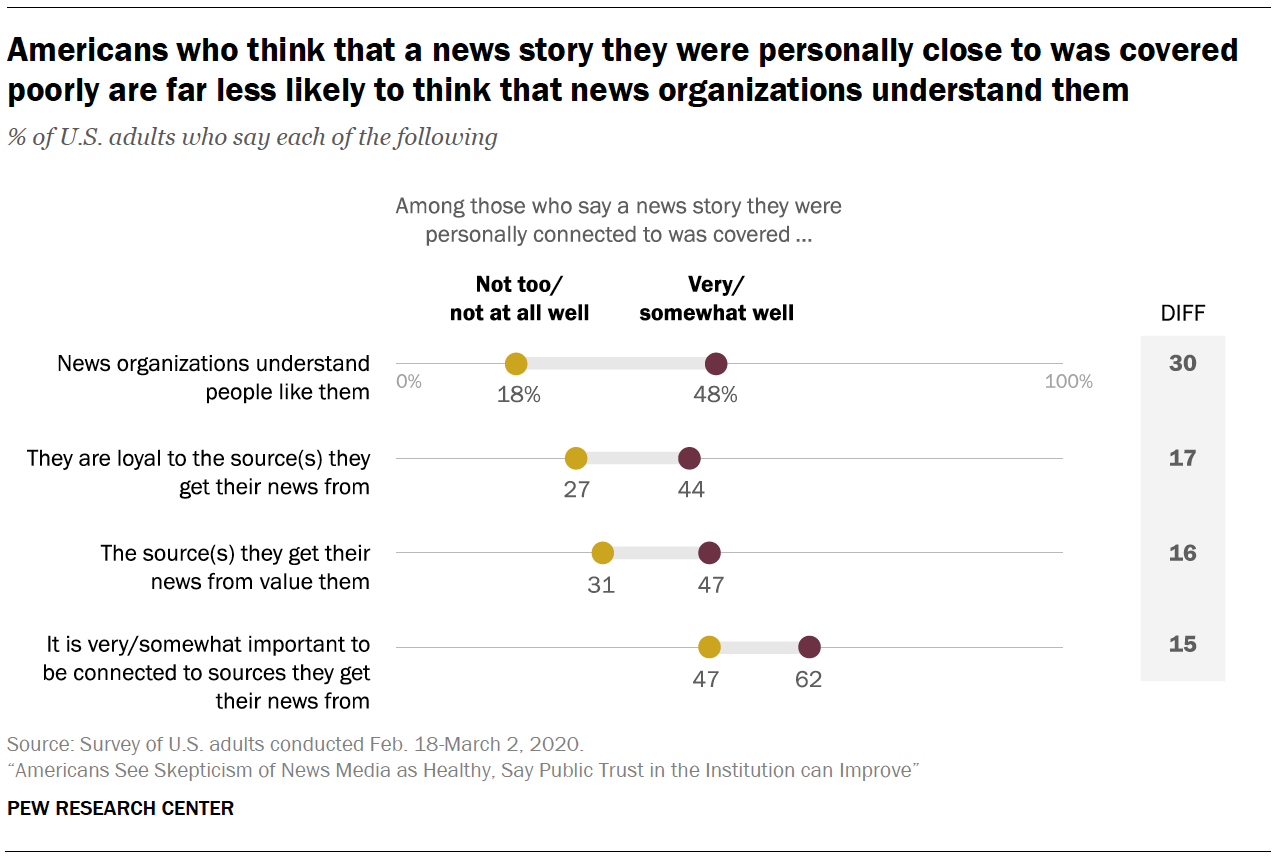 Of course, Americans put weight on the quality of journalists’ work when choosing their news outlets, but many also look for personal connections with a news source. The survey asked whether six different attributes of a news outlet and the content it produces – all related to how news organizations and journalists connect with their audience – are important in deciding where they get their news from. Among these six, journalists’ demeanor rises to the top: More than half of U.S. adults (56%) say that journalists being friendly and warm is “very” or “somewhat” important in deciding on their news outlets. 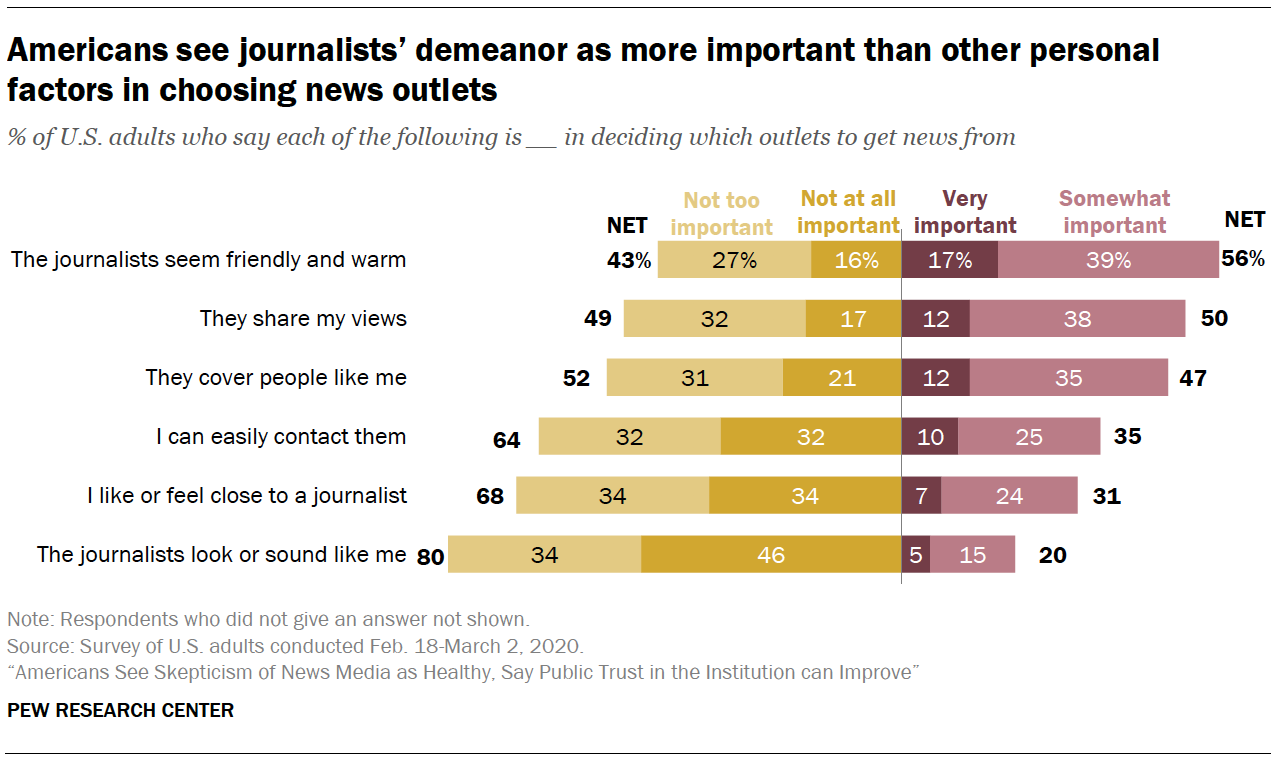 “The personality and the way they present the news. There are two or three I watch sometimes. It’s not so scripted. They’re giving you the news and you’re listening to it, but it’s kind of scripted. They read it with a prompt. It sounds more natural – a little bit homey and not arrogant. … I feel like being talked to. That kind of thing. Some of them put a little humor in there. It’s a balance. That’s what I look for.” – Man, 70

Half of Americans say finding an outlet that shares their views is at least somewhat important. This is counter to a survey conducted in 2013, in which most people said they do not necessarily want news that aligns with their own views.

“I think we’re really drawn to news sources that agree with our beliefs. And it’s hard to not.” – Woman, 71

“And so, for me, personally, if this headline reads more to my values or what I’m already agreeing with, I’m more to trust this.” – Man, 23

“The people on there are the same people. You build a relationship even though you don’t know them personally. You know their stance on things, and how they portray certain things” – Woman, 51

A similar portion of Americans (47%) say it is at least somewhat important that the news outlet covers people like them in its stories.

Fewer say the same of being able to easily contact the outlet (35%) or feeling close to a specific journalist (31%). And one-in-five (20%) say that when they are selecting a news outlet, it is important to find journalists who look or sound like them. These priorities differ dramatically, however, across demographic categories – particularly by race and ethnicity (see Chapter 5).