NSW Transport is yet to alert up to tens of thousands of people whose full driver’s licence details were mistakenly left exposed in an open cloud storage.

The cache was discovered last week by Ukrainian security consultant Bob Diachenko who stumbled upon the directory while investigating another data breach.

The storage folder, which he said was easily discoverable, contained back-and-front scans of NSW licences alongside tolling notices hosted on Amazon’s cloud service.

The documents revealed names, photos, dates of birth and ad...

In what has been a turbulent year for Tasmania’s job market, 23-year-old George Town resident Michael Blachford has shown that hard work still pays off. Mr Blachford had worked in a number of trades including painting, however he had recently been unemployed for about six months. He undertook at 12-week internship through the PaTH program facilitated by the Salvation Army’s Employment Plus office at George Town. Through this internship, Mr Blachford said he did various upkeep tasks for the George Town Council. As a result, Mr Blachford is now under contract from fellow George Town operation KEEN Partners to continue his work for council...
Read More

1. Americans are largely skeptical of the news media, but say there is room for confidence to improve 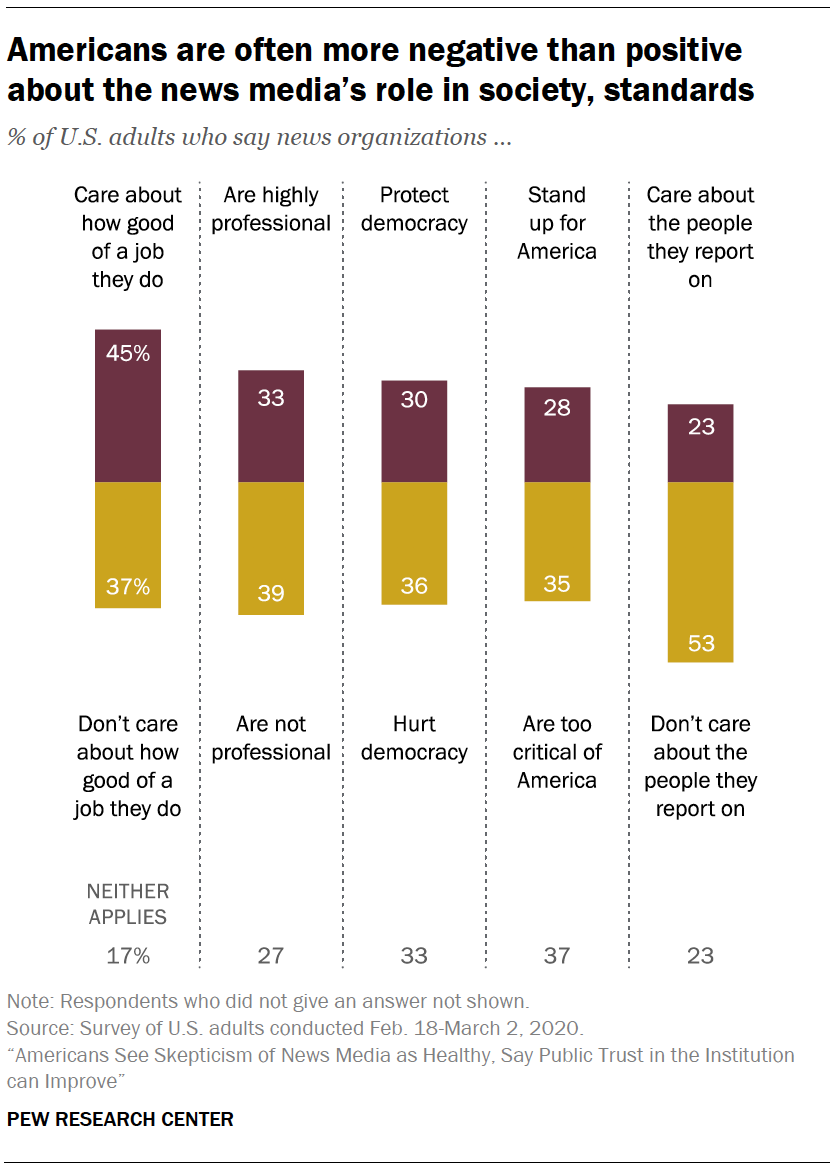 In general, Americans tend to express more negative than positive views about the news media and feel that that it is beneficial for society to approach the media with some level of skepticism. But the public does not view the media as a lost cause: A vast majority of U.S. adults say it is possible to increase their level of confidence in the institution.

Americans have a number of specific reservations about the news media’s role, standards and impact on society...

The spy watchdog has cleared an Australian intelligence agency over complaints it failed to provide appropriate mental health support when one of its officers had a career-ending breakdown on an overseas posting.

The Inspector-General of Intelligence and Security (IGIS) found no evidence that a former intelligence officer, known as Witness J, had been refused requests for help.

But Witness J, possibly the only person in Australian criminal history to be tried, sentenced and imprisoned in secret, has rejected the Inspec...

Live events industry on the brink as cancellations flood in

David Kirkwood has started to dread answering his work phone. “Every time I get a phone call, it’s another cancellation,” he said. “We’ve lost so much trade, a lot of money. I haven’t worked in an outdoor or indoor event since March.” Mr Kirkwood’s business, DK Audio in Latrobe, provides audio solutions for events throughout the North-West, but his trade has fallen off a cliff due to COVID restrictions. Last week, cancellations flowed through for Christmas Carols, New Year’s Eve, Smithton’s Devil Country Muster and Australia Day. Event organisers have been crunching the numbers and deciding they’re not viable due to increased costs for security, insurance, cleaning, COVID compliance and smaller attendances...
Read More

2. Americans largely see news organizations as opaque, particularly when it comes to finances

The public often feels in the dark about how news organizations produce their news and the potential influences on it. Americans think news outlets are not fully transparent with them in a number of ways, which may also help explain their negative evaluations of the news media.

When asked how well news organizations explain six different aspects of their process to audiences – ranging from how they produce their news to article corrections and their finances – Americans overall give news outlets more negative than positive marks. But one aspect stands out as especially opaque to audiences: Where do news organizations get their funding?

About a quarter of Americans (27%) say news organizations do “very” or “somewhat” well when it comes to explaining where their money comes from, while ...

Five people were hospitalised in a critical condition — including two police officers who were the first at the scene — but their lives are not in danger, Norwegian news agency NTB said.

Two of the five were released from intensive care on Monday, NTB reported.

Police said that two people faced preliminary charges of trespassing and illegally being inside a bunker.

Tasmanian drug overdose data released on Monday highlights the need for regular review of prescription medication, a pharmaceutical leader has said. The report by the Penington Institute showed there were 180 unintentional drug-induced deaths in Tasmania over five years from 2014 to 2018. There were 271 total drug-induced deaths over this period. In other news: Alcohol, Tobacco and other Drugs Council Tasmania policy manager Jackie Hallam said the majority of overdose deaths in Tasmania were linked to prescription drugs, as was the case for other states. She said unintentional deaths had risen to 34 deaths in 2018 from 21 deaths in 2001...
Read More

3. Americans who have a closer relationship with their news sources are more supportive of the news media overall

Americans’ relationships with their news sources are strongly linked to their views of the news media more generally. For example, those who feel connected with their news sources are much more positive toward the news media in general – though most say they don’t feel this type of connection. Likewise, those who think something close to them personally was covered well also tend to have more positive views toward the media overall.

When deciding how to choose their news sources, Americans have a range of priorities, with journalists’ demeanor, perspectives and willingness to cover people like them rising to the top.

Lebanon’s prime minister-designate has called for a new government to be formed “in record time” hours before the French President is due to visit the crisis-hit country.

Mustapha Adib, Lebanon’s ambassador to Germany, has pledged to speed up the investigation into the massive Beirut explosion which killed at least 190 people and injured 6000.

The Government resigned less than a week after the August 4 blast, which was caused by the ignition of nearly 3,000 tonnes of a...