2. Attention to candidates increases, but what Americans know and think about them diverges by party, media sources

With the national nominating conventions concluded and the election cycle entering its closing stretch, Americans are now following news about the presidential candidates more closely than they were a few months ago. And while there are virtually no partisan differences in how closely Americans are following the election, there are some distinctions within parties depending on where people get their political news. 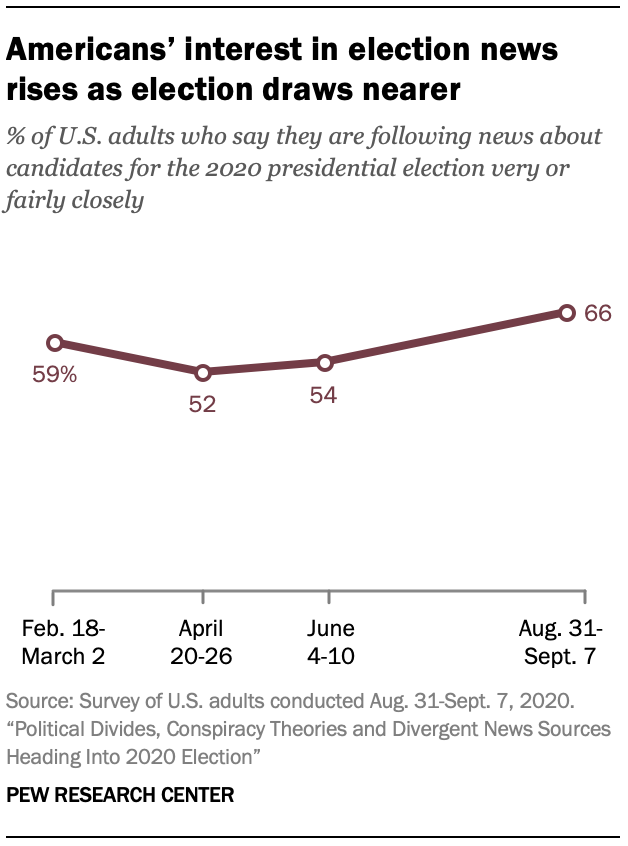 Throughout this election year, news about the presidential candidates has competed with several mega-stories, in particular the coronavirus pandemic and the ongoing protests over social justice that were triggered by the killing of George Floyd in late May. In June, for example, about half of Americans (54%) were following election news very or fairly closely, while 84% said they were doing so for news about the protests and 86% for news about the COVID-19 outbreak.

But within the parties themselves, there are differences in how closely people are following news about the candidates based on the major sources they use for political and election news.

In this analysis, there are four media-usage groups among Republicans (including leaners): those who only indicated Fox News and/or talk radio shows like Sean Hannity and Rush Limbaugh as major news sources for political and election news (these are the two sources among the eight whose audiences lean to the right politically); those who cited Fox News and/or talk radio as well as at least one of the other six news sources asked about; those who did not cite Fox News or talk radio as a major source but selected at least one of the others as major sources; and those who said that none of the eight providers mentioned in the survey are major sources of political news for them.

There also are four groups among Democrats (including leaners): those who cited only CNN, MSNBC, NPR, The New York Times and/or the Washington Post as a major news source (these are the five providers whose audiences lean left politically); those who cited one of the five as well as any of the others; those who did not cite any of the five but did cite at least one other; and those who did not cite any of the eight as major sources of political news. (For more details on how the news outlets were classified and the categories of news consumers, see the appendix.) 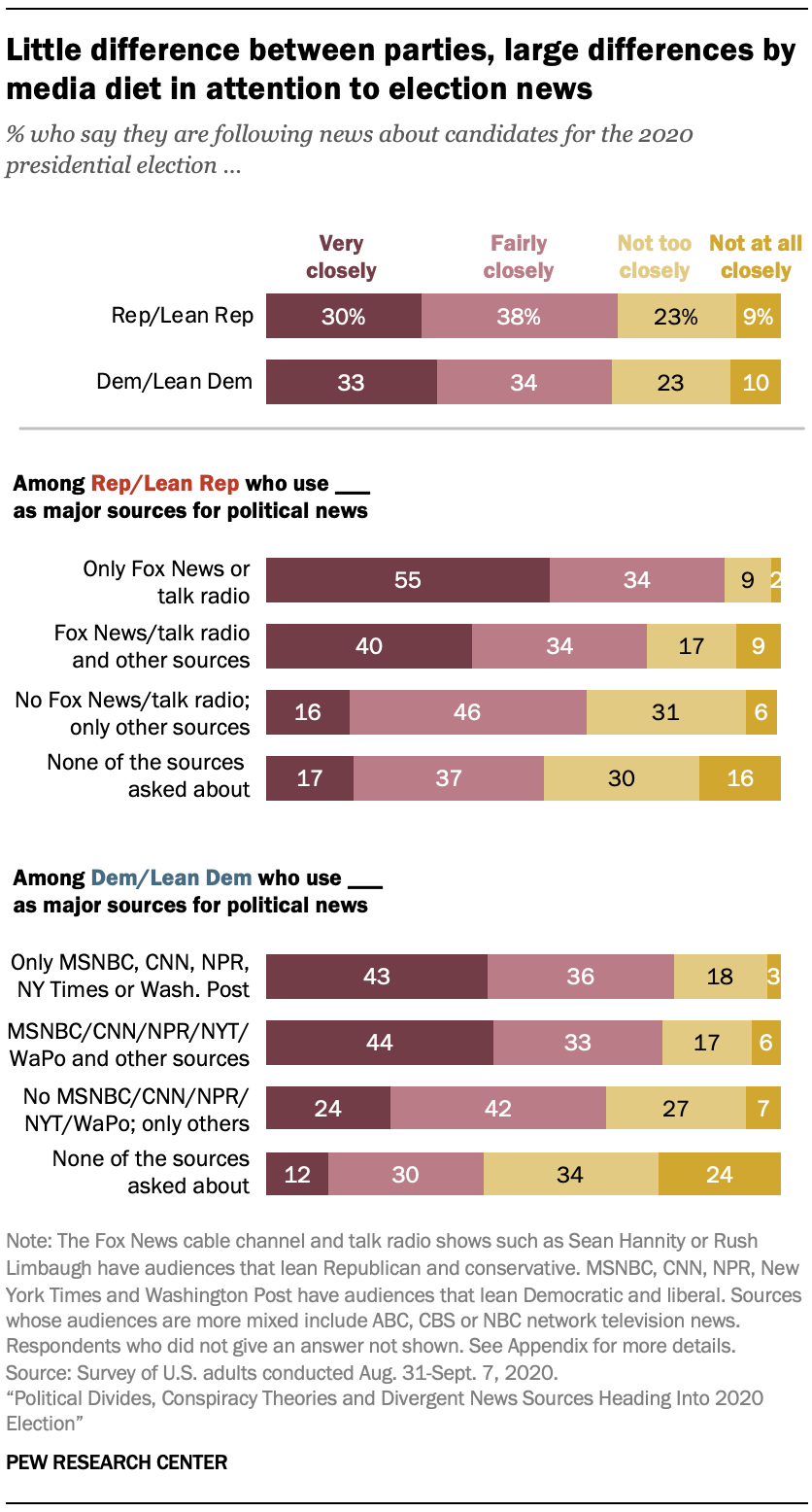 Among Democrats and Democratic-leaning independents whose major sources are only outlets with left-leaning audiences – CNN, MSNBC, NPR, The New York Times and The Washington Post – 43% say they are following election news very closely. But attention levels are similar (44%) among those Democrats whose major political news sources include a mix of these sources and other sources asked about. And the proportion paying very close attention falls to 24% among Democrats who cite only major sources other than the outlets with left-leaning audiences.

Several questions designed to track Americans’ knowledge about the election and candidates revealed significant partisan gaps between Democrats and Republicans.

Citing safety and fairness issues connected with voting during a national pandemic, Trump publicly mused about the idea of delaying the Nov. 3 election – an authority the president does not hold. Asked whether he has the authority to do that, Democrats and Republicans offer markedly different responses. 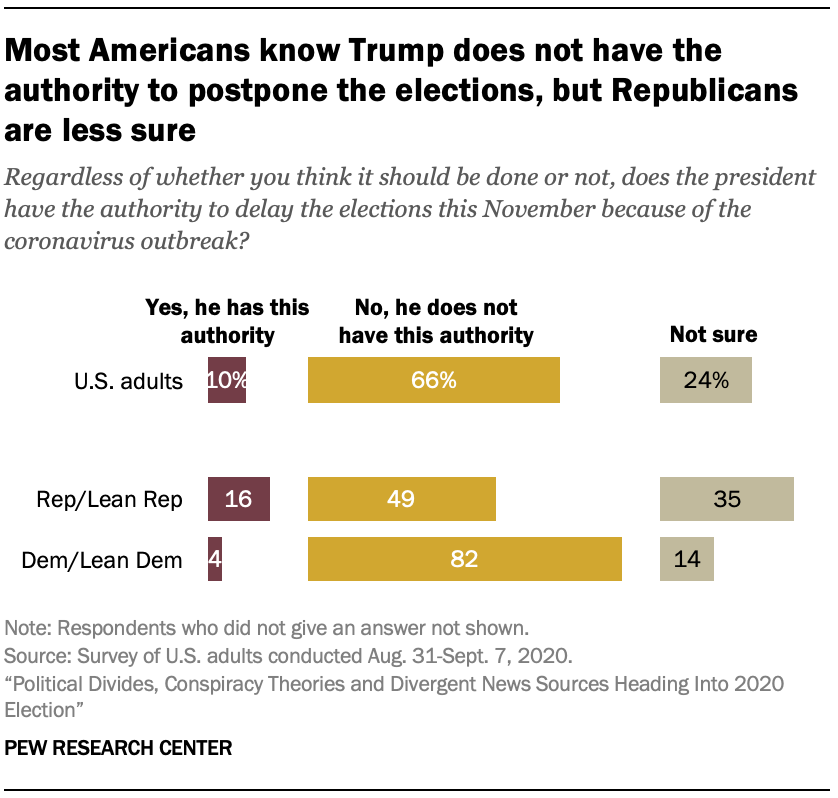 About two-thirds of all adults (66%) correctly say that the president does not have that authority, with only 10% saying he does – and the remaining 24% say they are unsure. But only about half of Republicans and Republican-leaning independents (49%) say the president cannot delay elections, while 16% say he can and about one-third (35%) say they are not sure. An overwhelming majority of Democrats and Democratic leaners (82%) say he cannot delay the election, with only 4% saying he can.

For the most part, there are few differences in responses to this question by media diet within parties. 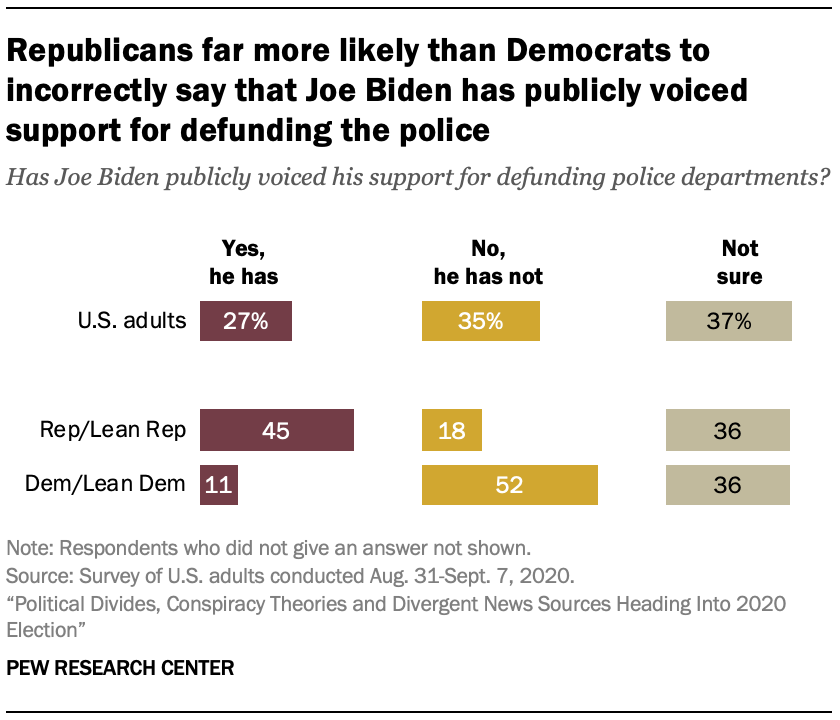 A second question about Joe Biden’s position on what has become a significant and heated campaign issue not only produces wide partisan divergence but also highlights differences within parties depending on the news sources being used.

While Donald Trump and his campaign have accused Biden of wanting to defund the police, a position supported by some activists, the Democratic nominee has stated that he does not support defunding the police, but would consider redirecting some police funds to services like mental health counseling.

Among all Americans, 35% correctly respond that Biden has not voiced support for defunding the police, while 27% say he has. Another 37% say they are not sure.

Democrats are far more likely to say Biden has not voiced support for defunding the police (52%) than Republicans (18%). On the other hand, 45% of Republicans say that Biden has voiced support for defunding police, versus just 11% of Democrats who say the same. About a third in each party (36% of both parties) say they are not sure about Biden’s position. 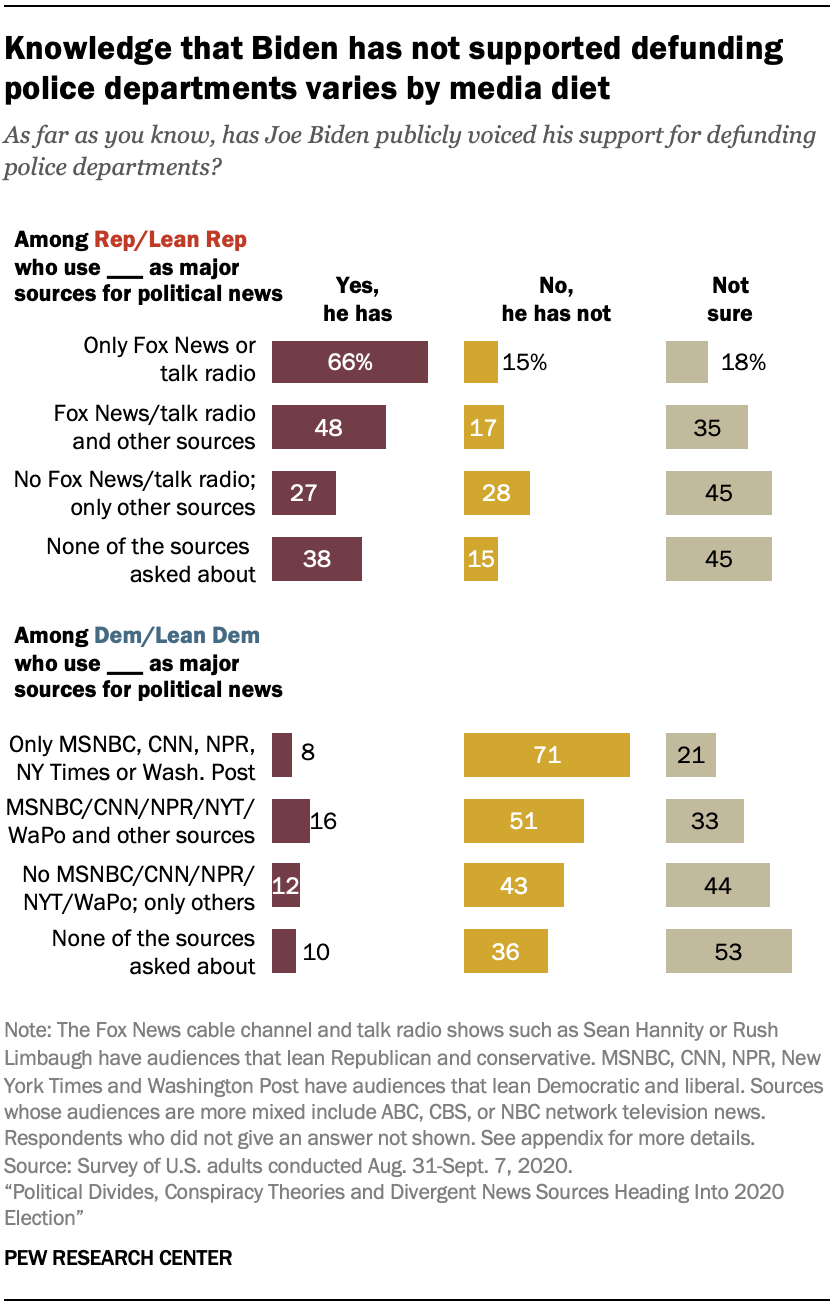 On this question, there are large differences among Republicans with different media diets. About two-thirds (66%) of those who only named Fox News or talk radio as their major sources of political news say Biden voiced support for defunding the police, far more than the 48% in the group that uses a mix of Fox News, talk radio and other outlets asked about, and the 27% in the group that relies on major sources other than Fox News or talk radio who provide the same answer. 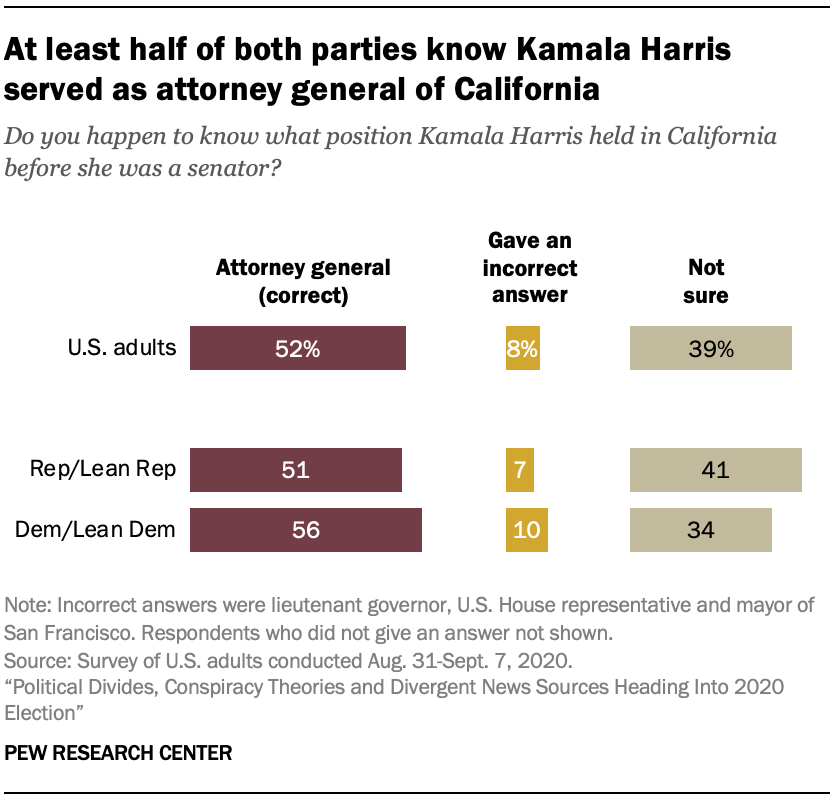 Although she had competed earlier in the crowded 2020 Democratic presidential contest, Sen. Kamala Harris was reintroduced to the nation when Biden announced her selection as his running mate six days before the party’s convention. At the convention, Harris devoted part of her speech to her personal history and story.

A question about Harris’ resumé produced similar responses from Democrats and Republicans, but one that asked about views of her ideology highlighted varying partisan perceptions as well as differences by media sources.

Among all Americans, 52% correctly answered that Harris had been the California attorney general before being elected to the Senate, with similar portions of Republicans (51%) and Democrats (56%) responding correctly. Still, a substantial minority of both parties – 41% of Republicans and 34% of Democrats – are not sure of the answer.

When asked to characterize Harris’ political views, 43% of all adults say she is either very liberal (25%) or mostly liberal (18%), while 25% say they are not sure. But when broken out by party, Republicans are more than 10 times as likely as Democrats to describe her as very liberal. 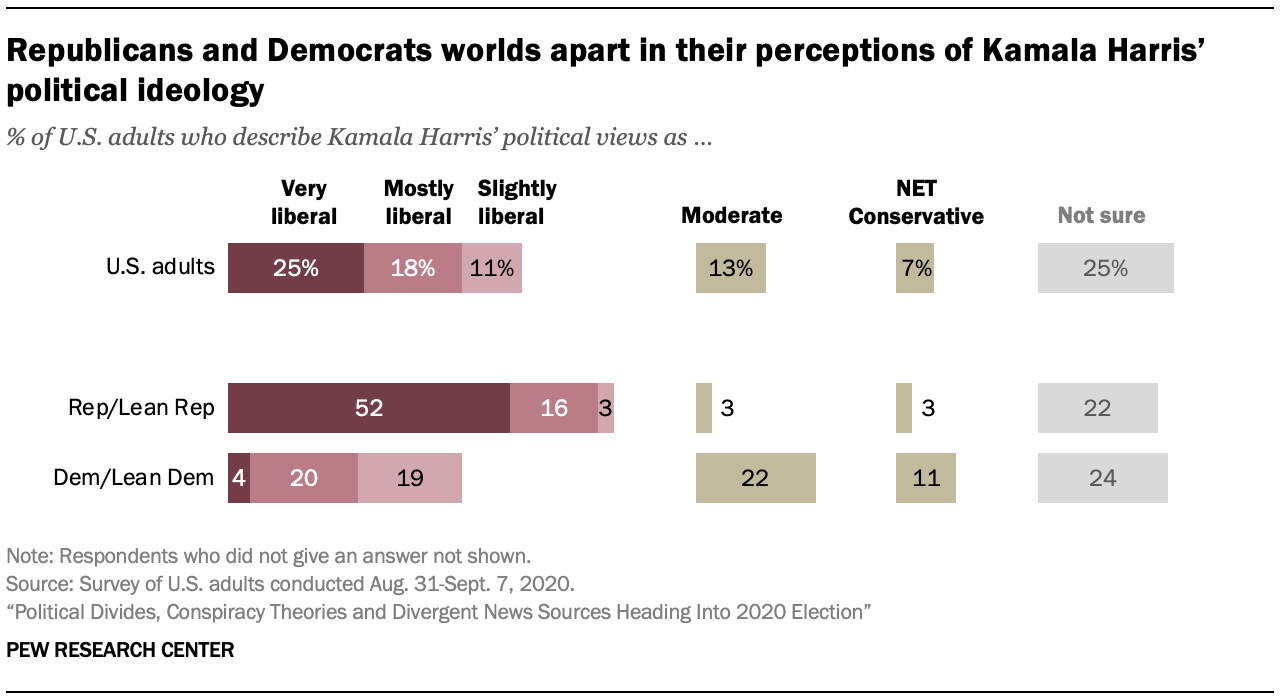 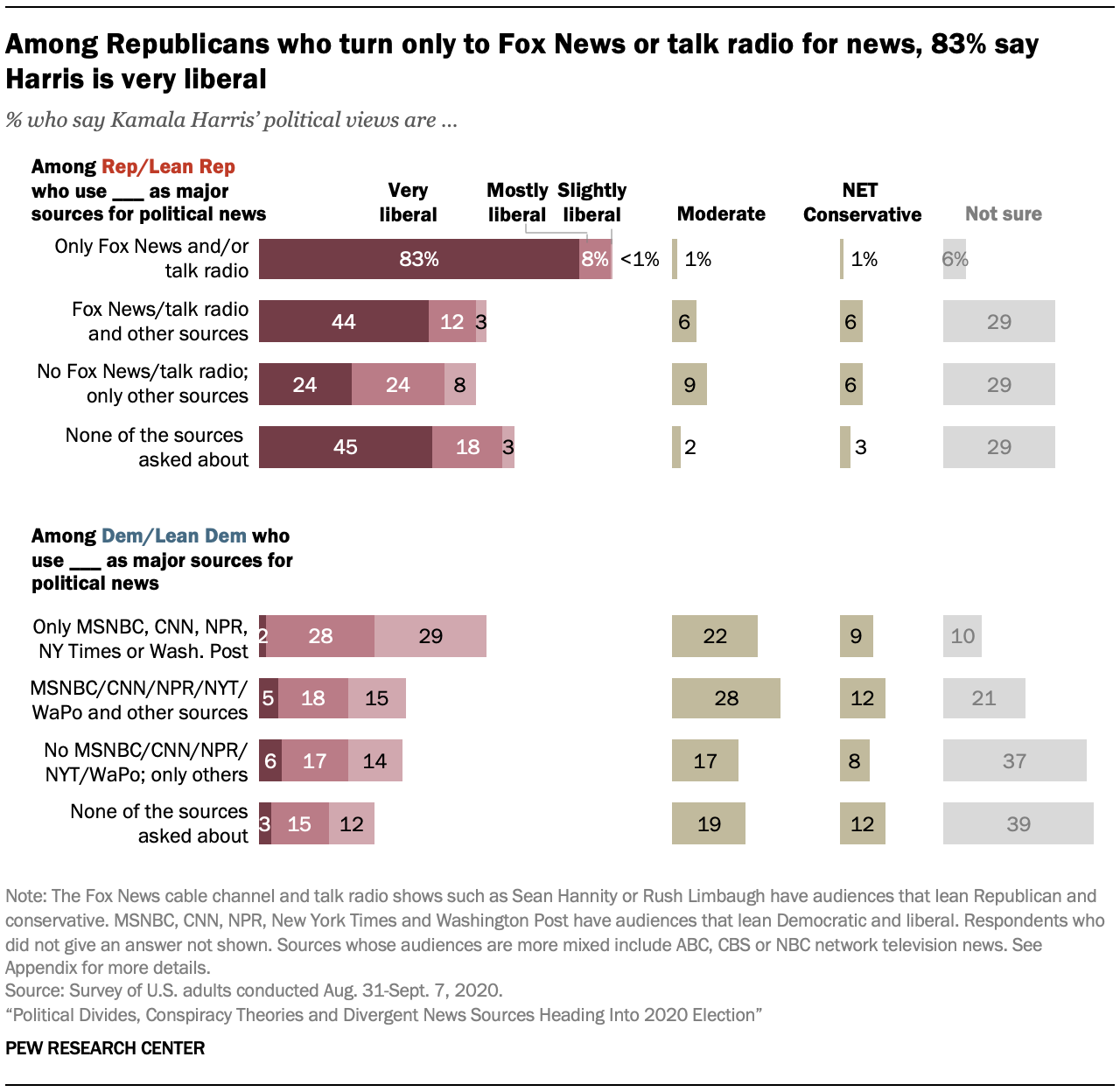 The percentage of Democrats within each of the four media diets who say Harris is very liberal is in the single digits. About six-in-ten of those whose major sources have only left-leaning audiences say she is very, mostly or slightly liberal (59%) – higher than Democrats in other groups who say the same (39% or fewer do). And for Democrats whose major sources do not include any in the left-leaning audience group, a plurality are not sure about her ideology (37%). 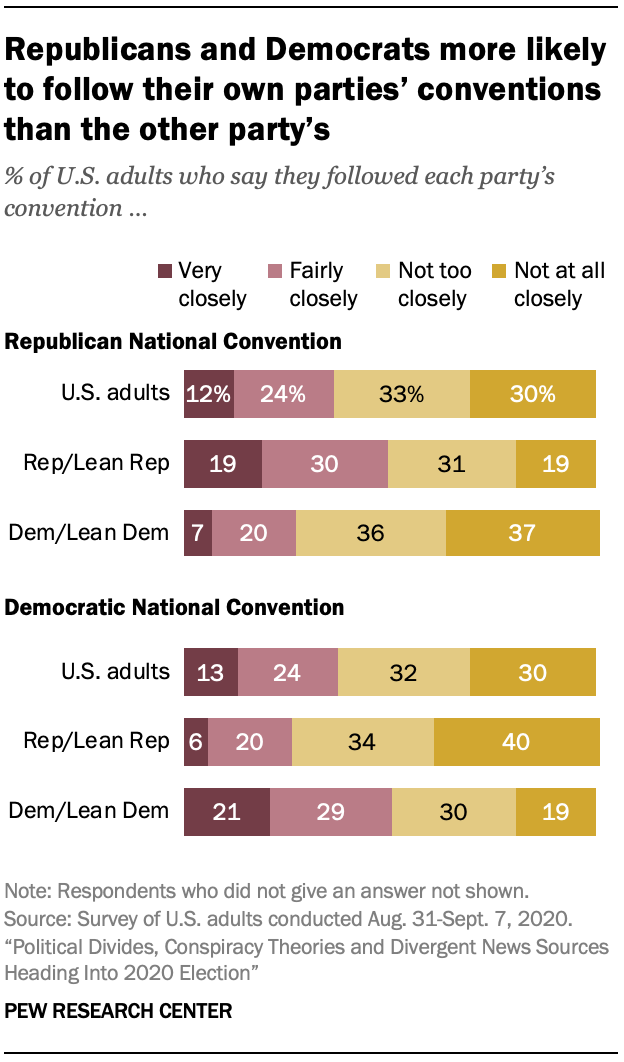 This year’s national nominating conventions, held during the last two weeks in August, had to be reinvented as COVID-19 forced many events to be held virtually or as a hybrid of in-person and virtual staging. Gone was much of the pomp and circumstance, as well as some of the audience that traditionally tunes in to these events.

Large party gaps in the assessment of campaign media coverage, and among Republicans, big differences by media diet 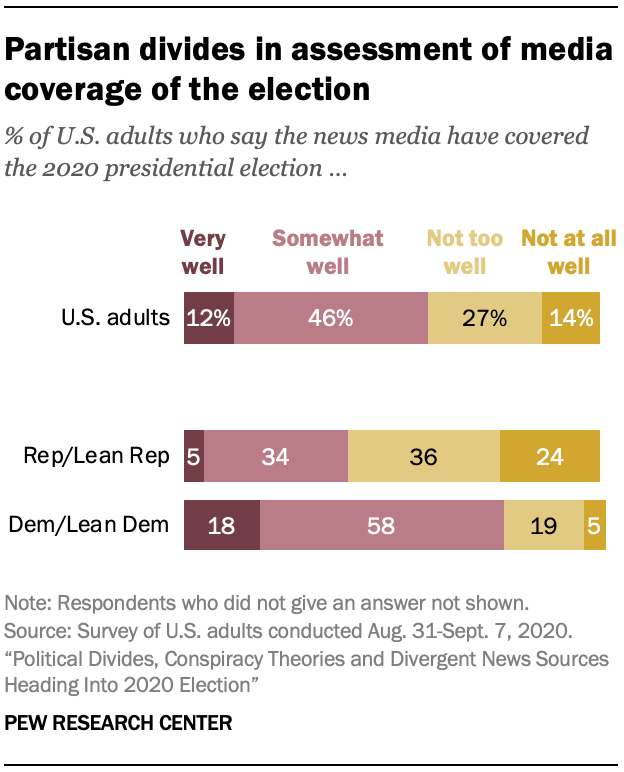 Overall, the media seem to get passing grades when it comes to covering the general election. But as previous research has shown with evaluations of media performance, Republicans offer a much more critical assessment than Democrats. And among Republicans, those whose main election sources include only talk radio or Fox News gave the media far lower grades than fellow party members with different media diets.

Among all Americans, 12% say the media have done very well covering the election, with a solid plurality (46%) saying they have done somewhat well. Another 41% say they have done not too well (27%) or not at all well (14%).

Democrats and independents who lean Democratic offer a generally positive overall assessment, with about three-quarters (76%) saying the media have done either very well (18%) or somewhat well (58%) in covering the election. But only half as many Republicans and Republican leaners (38%) say the media have done very well (5%) or somewhat well (34%). And about six-in-ten Republicans (61%) say news organizations have either not done too well (36%) or not done at all well (24%) in chronicling the 2020 elections. 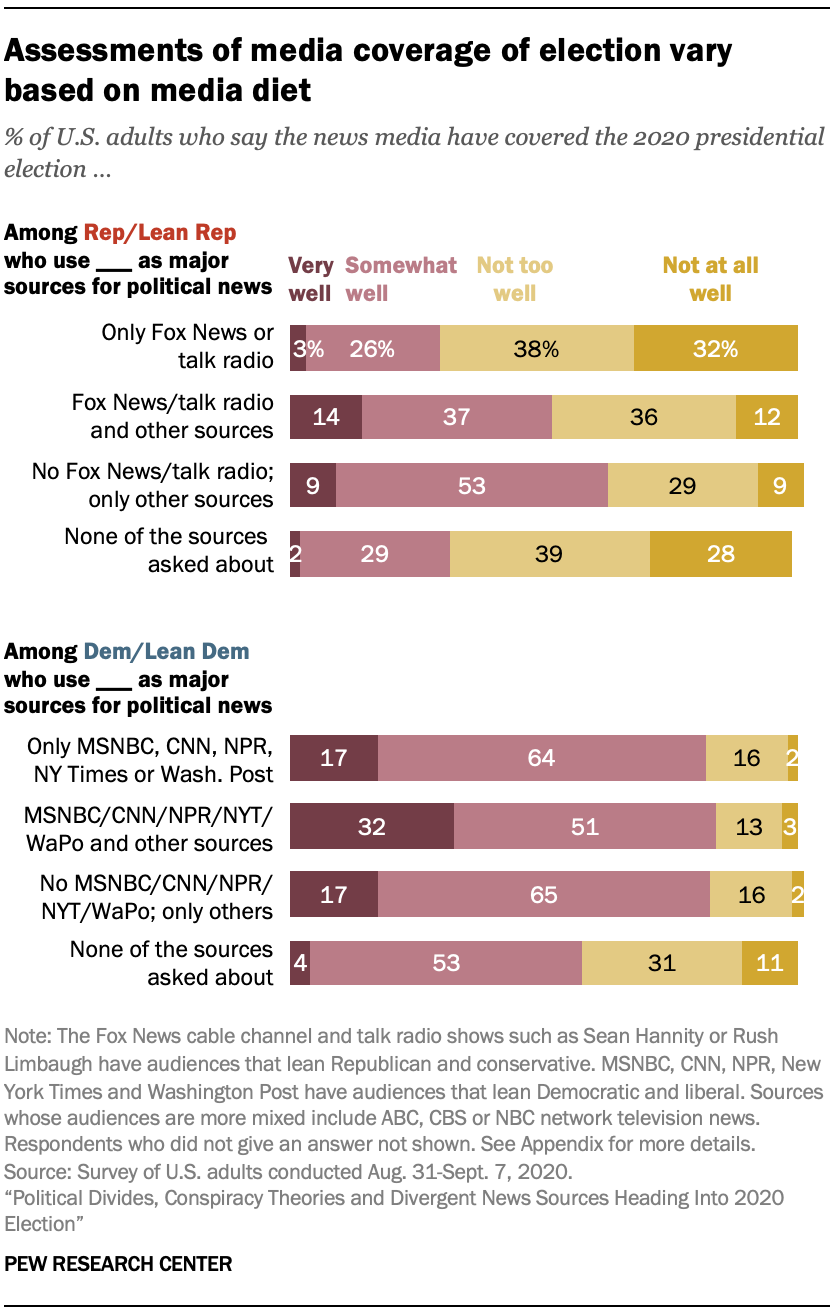 Among Democrats and Democratic leaners, those who cite the Biden campaign as a major source for political and election news are far more likely to give the media positive reviews of their election coverage. Four-in-ten of those Democrats who say the Biden campaign is a major source say that the media have done very well covering the presidential election, compared with just 12% of other Democrats. Among Republicans (including leaners), ratings of the news media’s election coverage are relatively low, regardless of whether they say the Trump campaign is a major news source or not.