2. Americans largely see news organizations as opaque, particularly when it comes to finances

The public often feels in the dark about how news organizations produce their news and the potential influences on it. Americans think news outlets are not fully transparent with them in a number of ways, which may also help explain their negative evaluations of the news media.

When asked how well news organizations explain six different aspects of their process to audiences – ranging from how they produce their news to article corrections and their finances – Americans overall give news outlets more negative than positive marks. But one aspect stands out as especially opaque to audiences: Where do news organizations get their funding?

About a quarter of Americans (27%) say news organizations do “very” or “somewhat” well when it comes to explaining where their money comes from, while an overwhelming majority say they do either “not too” (33%) or “not at all” (38%) well at this – a tension that has been noted by journalists themselves. Perhaps relatedly, six-in-ten U.S. adults say news outlets do not do a good job telling their audience about conflicts of interest. 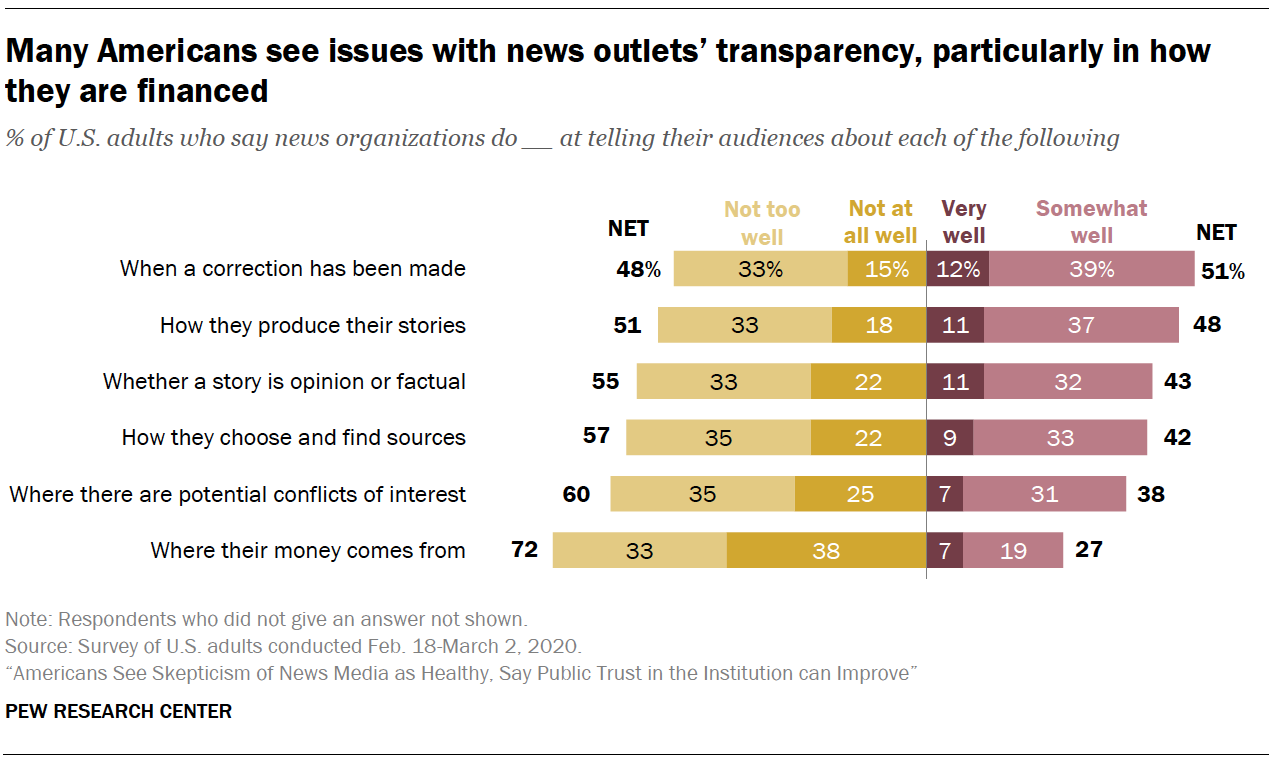 Majorities of both political parties and a range of demographic groups feel news organizations aren’t transparent about their finances.

While Americans see a lack of transparency of the media’s revenue stream, many are unaware of the financial situations of news organizations. A 2018 Pew Research Center study found that a majority of Americans (71%) thought their local newsrooms were doing well financially, when in fact local news organizations in general are struggling. And about a third of Americans (34%) said in April of this year that they were unsure of what financial impact the coronavirus outbreak has had on news outlets.

This perceived lack of transparency is amplified by the public’s opinion that financial and corporate interests have influence on the news in some way. In fact, a vast majority of Americans (80%) think that these interests at least “somewhat” influence the news they get, including 38% who say they have “a great deal” of influence. Only 19% say they have not very much or no influence at all on the news.

“You want to say what those – the contributors want you to say. Say the people with the money put a lot of money into researching a pharmaceutical medicine. Well, they want to push this pharmaceutic medicine, so they want the news to talk positively about that. And if they’re contributing to campaigns or somehow paychecks of the media, then the media is going to lean more towards feeling positively about this new medicine. Same thing for politics.” – Woman, 46

Financial information is not the only area where Americans see a lack of transparency from news organizations. More than half of U.S. adults say news outlets do not too or not at all well in telling their audiences about how sources are chosen (57%) and about whether a story is based on fact or opinion (55%). The public is about evenly split on whether the industry does an adequate job explaining how stories are produced and when corrections have been made.

Most Americans think news organizations won’t admit when they make mistakes, and many say corrections boost their confidence in outlets 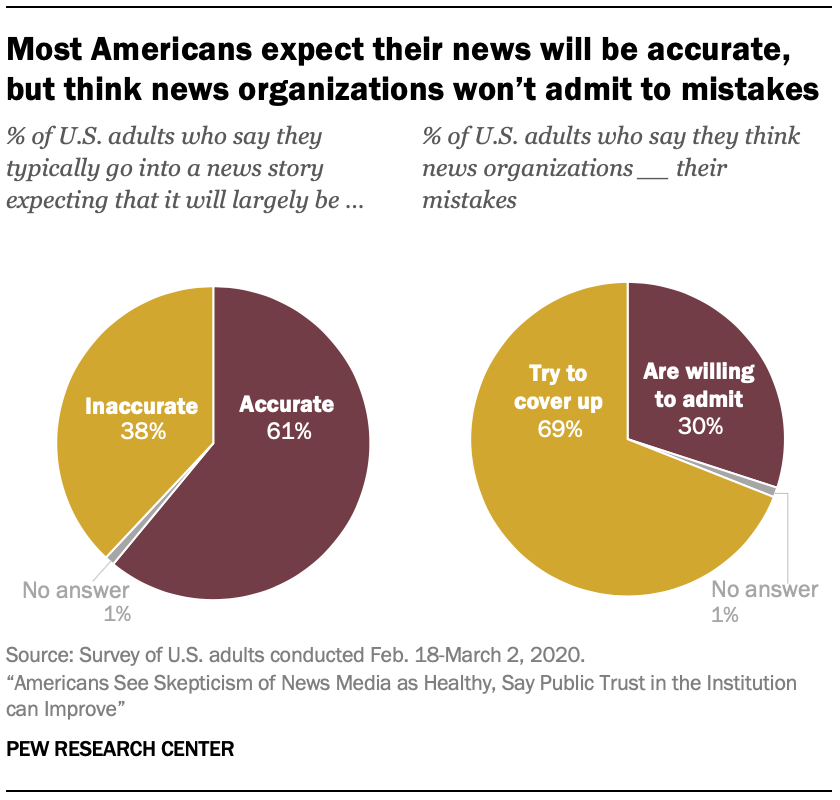 Even though about half of Americans think news organizations are at least somewhat transparent when they make a correction, the public lacks confidence that news organizations will even get to the point of admitting that they made a mistake.

Americans generally express confidence that their news will be accurate both overall and for specific topics such as the coronavirus outbreak.n Overall, most Americans (61%) say that they go into a news story expecting that it will largely be accurate, compared with 38% who expect it to be largely inaccurate.

Still, most Americans think that news outlets try to cover up mistakes when they do happen. Nearly seven-in-ten Americans (69%) say this, while far fewer (30%) think news outlets are willing to admit mistakes. This is on par with early 2018, the last time Pew Research Center asked this question. 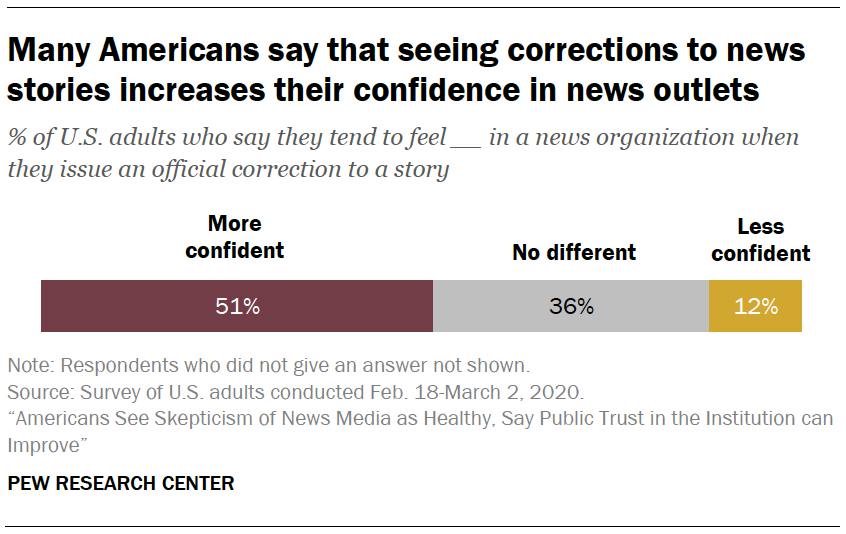 Fessing up to mistakes may be beneficial to news organizations’ reputations in the long run. About half of Americans (51%) say that they feel more confident in a news organization when they see an official correction, far higher than the portion who say it makes them less confident (12%). The remining 36% say that it makes no difference in their confidence about that outlet.

“Whatever came out first, they’re going to tell you. If it’s changed, they will retract it. So that is what I like, they admit to a retraction – this was wrong, we are retracting this, … and I like that, specifically, because I watch it on my show, and you can see here – there’s a retraction.” – Woman, 53

“I like when they report something and get it wrong, they apologize for it and retract it. They say it out. ‘We made a mistake, we reported this and it wasn’t true.’ Some don’t.” – Woman, 32

When mistakes do make their way into news reporting, Americans see a range of reasons why these errors occur, from malicious to more accidental. 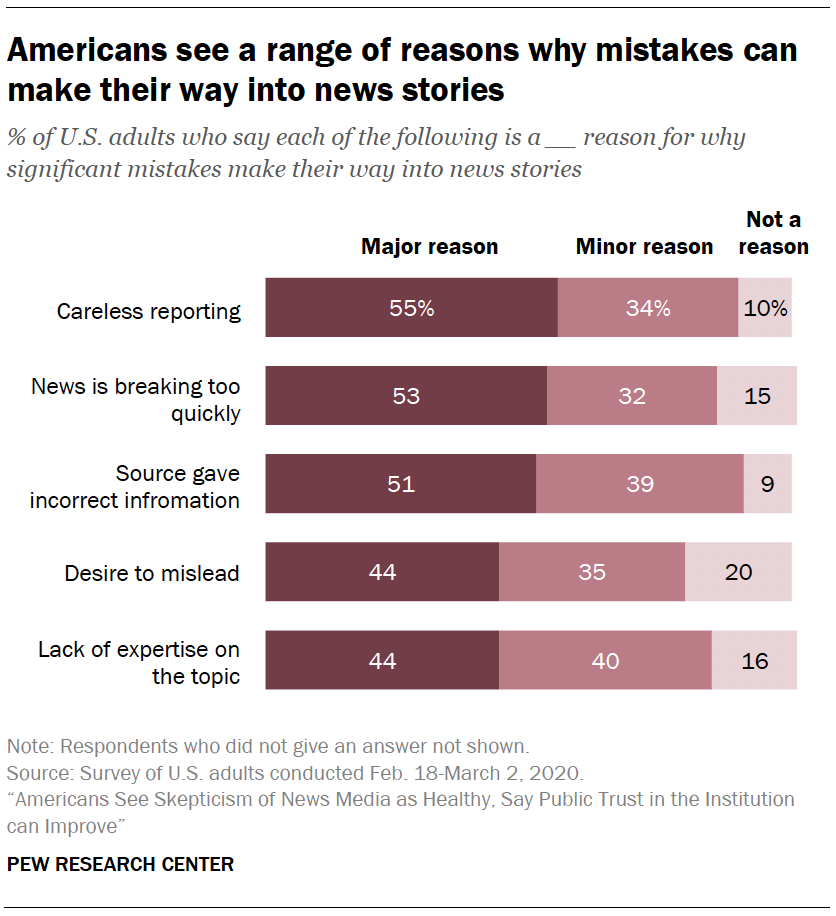 The survey asked about five potential reasons for why significant mistakes may occur in news stories; no single reason dominates. A little over half of respondents say carelessness is a major reason (55%), and a similar portion say it is because news is breaking too quickly (53%). About half say that sources giving incorrect information is a big reason for mistakes in news stories. This is closely followed by the feeling that a desire to mislead (44%) and a lack of expertise (44%) are major reasons for errors.

Whether people think errors in news stories happen unintentionally or with ill intent aligns with their broader views of the news media. For instance, those who think the public has at least a fair amount of confidence in the news media are less likely than others to say the desire to mislead is a major reason why significant mistakes occur (31% vs. 55%). There also are divides between the two major political parties on these questions, with Republicans more likely to expect ill intent from journalists (see Chapter 4).